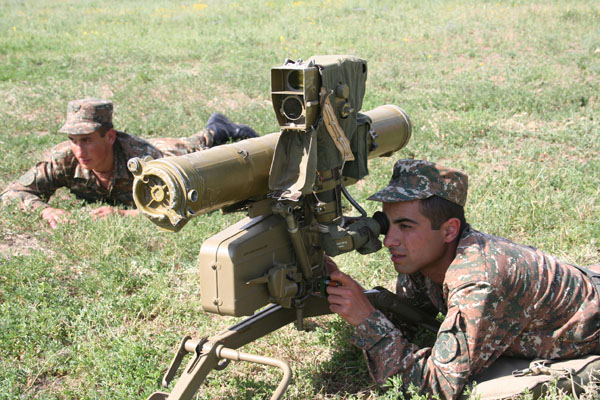 “The ability to conduct [military] operations in a nocturnal setting is very important, but a general modernisation programme even more so…”, thus spoke Armenia’s Deputy Defence Minister Davit Pakhchanian in an exclusive interview to local press. Pakhchanian spoke about new the new perspectives of Armenia’s growing defence industry, including future partnership opportunities and foreign investment benefits. The Deputy Minister mentioned that Yerevan is particularly interested in acquiring large quantities of anti-air and anti-tank defence systems among others.

One of the recent developments in Yerevan’s modernisation programme is the modernisation of the 9K111 Fagot anti-tank portable guided missile, which is considered by some military experts as one of the most effective anti-tank weapons ever produced. A programme within the Armenian defence industry has increased the capacity of this weapon type, adding an ultra-modernised sight capable of detecting targets farther way in minimal weather conditions. The Defence Ministry expressed that “one particular buyer (country) is interested in purchasing large quantities of this product”, without giving further details.

Besides the latter, the Deputy Defence Minister responded to a question on Israel’s Aeronautics Defense Systems recent refusal to test out its Orbiter-1K on Armenian positions, and the subsequent comment comment by the Israeli Defence Ministry. Regarding that issue, Pakhchanian expressed, – “Azerbaijan tried to implicate this [particular] Israeli company in [military] operations and use drones against Armenian positions, something that contradicts mercantile as well as International law. Naturally, I see the Israeli Defence Ministry’s decision as a positive one, but they must show consistency. This one act was discovered, but I am convinced there have been many more similar occurrences. “

Yerevan’s armament industry remains in the shade, as many details regarding it remain shrouded in secrecy.  Although it is still developing, it is though that the arms industry has forged ties with many different private producers overseas, as well as formed part of programmes of other governments’ defence plans. A series of institutions and companies within and outside of Armenia form part of its arms industry, but exact details on their size or production remain unknown.

2017-09-07
Previous Post: IN PICTURES – Armenia and China Defence Ministers meet
Next Post: Autumn military draft in Azerbaijan in less than a month