Azeri conscript Bahruz Jalilbeyli turned his weapon on his fellow soldiers on 27 September, killing Lieutenant Nahid Abbasov along with Elvin Şerifli and Vusal Aghayev.  The incident happened at an undisclosed military outpost near the city of Julfa, in southwestern Nakhichevan. According to initial reports, the incident happened as a result of prolonged hazing Jalilbeyli had experienced during his military service. After the killing, Jalilbeyli is thought to have escaped, as no word on his detention has been mentioned by any source in the government, nor family. Before escaping, Jalilbeyli cut communication lines, as to hinder communications between his unit.

Azeri military authorities have not published information on the incident, for the time being remaining silent. Information on the event spread through social media and contact with local media outlets with family members of the deceased. Elvin Şerifli’s family confirmed his death and mentioned about his funeral, stating that no further comment about the incident was provided by the authorities. Vusal Aghayev’s death was confirmed through social media on the same day. 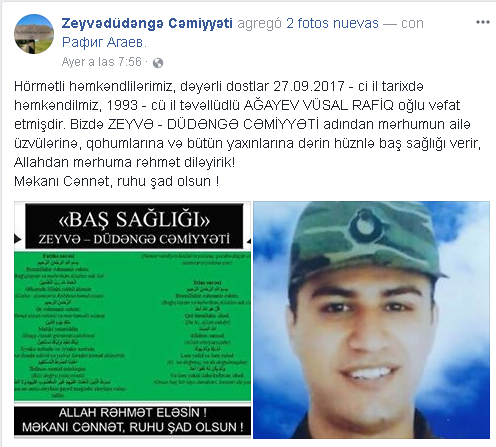