On 25 July, the OSCE representatives carried out a ceasefire monitoring mission on the northern segment of the line-of-contact (LOC) near the village of Gulustan on the Azeri side and the northern Martakert region on the Armenian side, in an area known as the region of Shahumyan during the Nagorno Karabakh Autonomous Oblast Soviet era, now de facto controlled by Azerbaijan. 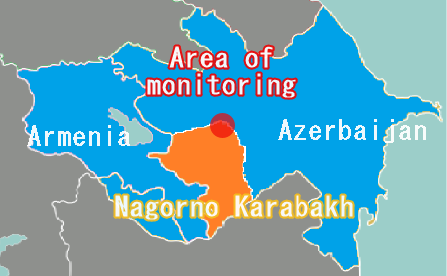 All went according to planned, with no interruptions being reported on either side. This appears to be the 13th ceasefire monitoring mission the OSCE has conducted this year, the previous year on this same day a monitoring mission was conducted on the border between Armenia’s Tavush and the Azeri Tavuz provinces.

On the Azeri side, OSCE representatives were Simon Tiller (United Kingdom), Ognjen Jovic (Bosnia and Herzagovina), while on the Armenian side the OSCE’s Personal Representative of the Chairperson-in-office Andrzej Ksprzyk and representatives Mihail Olaru (Moldova)  and Ghenadie Petrica (Moldova).