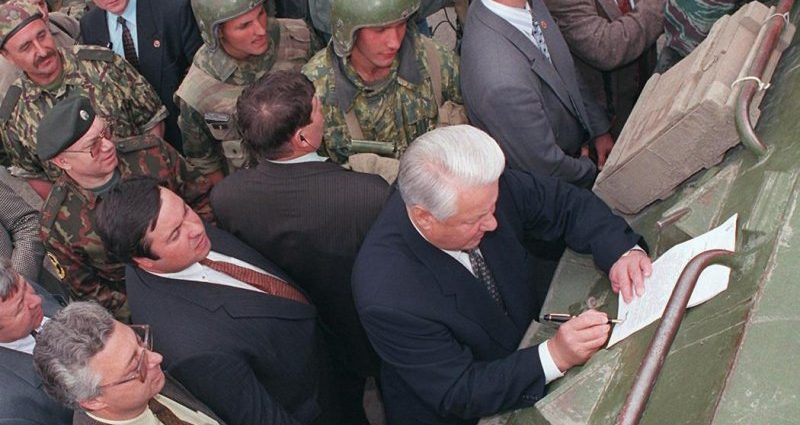 MOSCOW — The military commander in chief of the Commonwealth of Independent States warned Wednesday that if outside powers intervene in the Armenian-Azerbaijani conflict in Nagorno-Karabakh, “we shall be on the brink of a new world war.”

The comment by Marshal Yevgeny I. Shaposhnikov came in the wake of recent indications from Turkish leaders that they would consider sending arms or even troops to bolster Azerbaijan in its festering conflict with Armenia.

The two former Soviet republics have fought over the enclave of Nagorno-Karabakh for more than four years in an intractable feud that has claimed more than 1,500 lives and now threatens to pull other countries into the fray.

The Karabakh conflict “could now develop into a wider military action–God forbid,” said Mikit Kazaryan, an Armenian diplomat in Moscow.

Russia could also be drawn into the Karabakh fighting under the terms of a collective security agreement it signed last week with several members of the Commonwealth including Armenia–but not Azerbaijan.

As new spheres of influence form in the territory where the Soviet empire once reigned supreme, Russia, Iran and Turkey are all jockeying for position in the Caucasus Mountains region and Central Asia.

Turkey, which has been courting the Muslim, Turkic Azerbaijanis intensively, had remained relatively restrained, its ambitions tempered by its Western orientation and NATO membership. But this week, the Azerbaijanis lost control of a key town in their own territory and accused Armenia of attempting to move on Nakhichevan.

Nakhichevan, an Azerbaijani enclave in Armenia bordering Turkey, adds a particularly volatile element to the conflict because, under a 1921 agreement, Turkey is charged with serving as guarantor of its territorial integrity.

The Turkish government, in which Ozal’s party no longer holds a majority, does not appear poised to intervene militarily, but it warned Armenia that “it will be responsible for the consequences if it does not correct its aggressive attitude.”

Armenians from the foreign minister on down, however, have denied categorically that they have any territorial claims on Nakhichevan or have launched any attacks there.

According to the Armenian Foreign Ministry, there have been exchanges of fire on the Armenia-Nakhichevan border, but only because Armenia was shooting back at Azerbaijani positions that had begun shelling Armenian villages, killing at least nine people.

Armenia has also denied occupying the Azerbaijani town of Lachin, although it acknowledges that Armenian fighters from Karabakh are now controlling a road that runs through Azerbaijani territory, past Lachin, to link Armenia to Karabakh.

They were forced to take the road, Armenian officials said, to break the Azerbaijani blockade of Karabakh that had brought its Armenian inhabitants to the brink of starvation and disease.

Because the world community had done nothing to break the blockade for years, Armenian Foreign Ministry official Matthew Der Manuelian said, the Armenian militants decided “to take the situation into their own hands. They were desperate because their families, their children, were hungry.”

Der Manuelian said certain factions in Azerbaijan, which is in the throes of an election campaign and a messy power struggle, appear to be trying to make political capital out of Lachin and Nakhichevan.

In typical fashion, Azerbaijani accusations mirrored those of the Armenians.

“I think the Armenians want a war between Russia and Turkey,” Fuad Gadzhiev, a spokesman for the Azerbaijani Embassy in Moscow, said, “because in that case they’ll have a chance to seize their historic lands in Turkey”–the vast tracts of Turkey that once constituted western Armenia.

Turkish Prime Minister Suleyman Demirel, who has much more power in the Turkish government than Ozal, said Wednesday that he believes Turkish military intervention would be an error.

In Washington, State Department spokeswoman Margaret Tutwiler said Turkey has played a positive role in the Armenian-Azerbaijani dispute. However, she quickly added that the U.S. government “does not support intervention in this conflict by any outside party.”