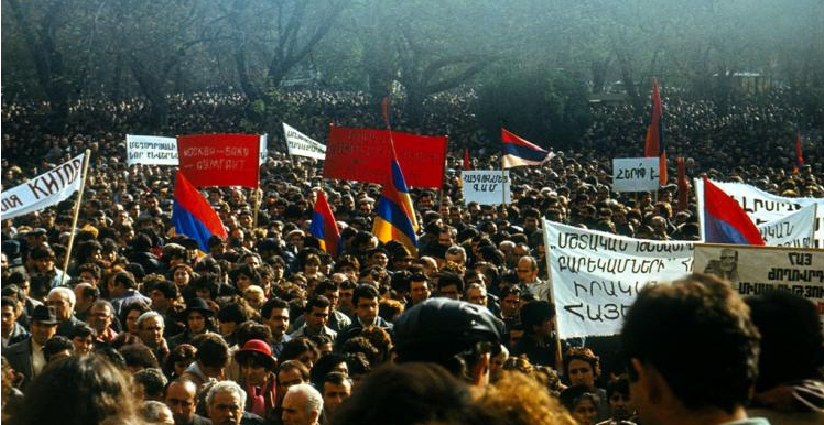 Armenia and Nagorno-Karabakh will hold official ceremonies on 20 February to mark the 10th anniversary of the mass movement for the re-unification of the two territories. Politicians, prominent intellectuals, and the media will stress the significance of the occasion for the Armenian nation and call for the restoration of the national solidarity that reigned 10 years ago. They will also try again to evaluate the profound influence the movement for reunification has had on Armenia.

When the legislative body of the former Nagorno- Karabakh Autonomous Oblast declared its desire to split away from the then Soviet Republic of Azerbaijan and join the Armenian SSR, very few people foresaw what the consequences of that demand would be. Undoubtedly, the possibility of a war with Azerbaijan did not enter the minds of the hundreds of thousands of Armenians who took to the streets of Yerevan to support what they saw as the just cause of their Karabakh co-ethnics. But the nationwide campaign of rallies and petitions that ensued gave birth to perhaps the most intractable territorial dispute in the former Soviet Union.

The Kremlin rejected the Armenian demands as endangering the stability of the empire. That, however, did not prevent the Karabakh movement from gathering momentum as it progressed from the romantic idealism of the perestroika era to a solid anti-Communist platform and the emergence of a new political elite, the so-called Karabakh committee, which in the late 1980s enjoyed the virtually unlimited support of the population. The committee soon expanded the movement’s agenda to include democratisation and market reforms. A party created on the basis of the committee, the Armenian Pan- National Movement (HHSh), came to power in the 1990 elections to the Supreme Soviet.

The movement for the unification of Karabakh with Armenia also engendered nationalist sentiments in neighbouring Azerbaijan, where anti-Communist groups not only opposed Karabakh’s secession but also agitated for abolishing the region’s autonomy. Increasingly, the attitudes of the two peoples became polarised. And as Moscow’s control over the union republics eroded, sporadic clashes between Armenian and Azerbaijani militias, the latter backed by Russian troops, developed into large-scale warfare. The collapse of the USSR in December 1991 signalled the beginning of war.

One of the questions Armenians will be asking themselves today is whether the Karabakh movement has achieved its aim. Owing to its decisive military victory over Azerbaijan in 1993-1994, the Republic of Nagorno- Karabakh is de facto independent, even though that independence has not formally been recognised by any other country. It has a powerful army and unfettered links with Armenia proper. To put it succinctly, it is now totally “Armenian.”

Yet the conflict has also taken an appalling toll on Armenia: thousands of war casualties and hundreds of thousands of refugees, a dramatic drop in living standards, economic decline, and mass emigration. But, most important, the military victory did not bring a lasting peace. Despite the Armenian leadership’s commitment to a peaceful solution of the conflict, the war threatens to resume at any moment. Moreover, Azerbaijan’s and Turkey’s blockade of Armenia stifles economic growth.

So was it worth all the trouble? Most of the Armenian elite would say “yes” and would advocate evaluating the Karabakh problem within the context of Armenia’s 3,000- year history, rather than in terms of immediate economic interests. Indeed, despite all the suffering it caused, the war has helped Armenians overcome an inferiority complex acquired over centuries of defeat and foreign oppression. And, as regards a future peace deal on Karabakh, the bargaining positions of the Armenians are now incomparably stronger than 10 years ago.

Armenians in general tend to be more ambivalent. Years of hardship have generated war fatigue among them. But aspirations to a better life are offset by a deep distrust of Azerbaijan. Many people are convinced that Baku would guarantee neither the Karabakh Armenian population’s security nor respect for its ethnicity, pointing to anti- Armenian pogroms in Azerbaijan from 1988-1990. Moreover, Armenians did not rally behind former President Levon Ter-Petrossyan, who promised prosperity in exchange for major concessions to Azerbaijan.

On the contrary, it seems that for the time being, Armenians will give Ter-Petrossyan’s more hard-line opponents a chance. Two of those opponents, Prime Minister and acting President Robert Kocharian and former premier and National Democratic Union Chairman Vazgen Manukian, are the key contenders in the 16 March presidential elections. The two men agree that Karabkh’s relationship with Azerbaijan must be on an equal footing, testifying to a consensus in Armenian society on both the Karabakh movement and the future of the peace process.

Armenia’s Defence Minister Vazgen Sarkisian recently suggested that even if Armenians had known in 1988 what they know now, they would still have agreed to forfeit their relative prosperity for the sake of Karabakh. And all the signs today are that he is right. The author is an RFE/RL correspondent based in Yerevan.

1998-02-20
Previous Post: Independent – How Armenia won the war but lost the oil
Next Post: Slate – How To Tell Armenia From Azerbaijan