In: Georgia, Only Azerbaijan, Regional

A rare incident has taken place on the Azerbaijan-Georgia border, in which an ethnic Azeri shepherd from Georgia, Ramin Bakirov, was shot in the head and critically wounded by Azeri border guards from the State Border Service (SBS). Different versions of the incident circulated on Georgian and Azeri media, all of which stating that Bakirov was indeed in stable condition.

Area of incident showing previous incident resulting in death in 2010 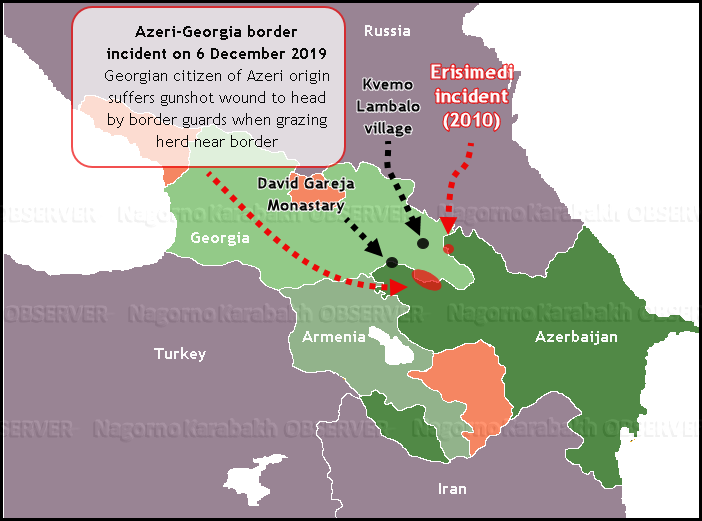 The incident was reported to have happened on 6 December, but was officially reported by the SBS five days later. In the official publication, SBS officials stated that the incident happened at the Jeyranchol desert near the northwestern segment of the border with Georgia. Border guards observed Bakirov approaching the border area, and while trying to steer his herd back into Georgia, his guard dogs attacked an Azeri troop detachment, who initially fired warning shots, and subsequently shot the dogs that attacked them. The notification goes on stating that Bakirov was then discovered laying on the ground next to his horse, was given given first-aid treatment and evacuated to a near by medical facility for treatment.

On day before the official Azeri statement, Georgia’s Ministry of Interior mentioned that one of their citizens was wounded in a border incident and was taken to nearby medical facility, adding that represantatives from Georgia’s Embassy in Baku had visited the individual, hinting that Bakirov indeed was taken to Azerbaijan for treatment (1, 2)

Media reports from the Georgian side mention a slightly different version. According to one report from Reginfo.ge who spoke with members of Bakirov’s family, said that the grazing area that he was in lied around 10 metres from the border, and hinted at some of his sheep nearing the border area after which he was accidentally shot by Azeri SBS guards. Azeri media outlet Haqqini.az also reported on the incident, limiting the content to that of the official government publication. Several other Georgian outlets repeated similar versions of the incident, all very similar in content, stating that the exact area of incident was not provided by Georgian interior officials, and adding that Bakirov was returning to the neutral area of the border when he was shot, indicating that he may have indeed crossed the Azeri border (1, 2, 3, 4)

Officials from both sides are apparently cooperating together for a thorough investigation of the incident. The Azeri-Georgian border dispute has experienced tension in the past couple years with numerous incidents of confrontations on the border, particularly near the David Gareja monestary; deaths and injuries from border incidents are rare, however they are known to have taken place in the past. In one such incident in the village of Erisimedi, divided in half by the border, a local Georgian, Ahmed Gaurgashvili, was apparently shot and killed by SBS officials after crossing an unmarked segment of the border to retrieve his cattle.

Bakirov is from the town of Kvemo Lambalo, 15 km from the border with Azerbaijan, and after the incident he was taken to Ganja, Azerbaijan for treatment, where his condition remains stable.