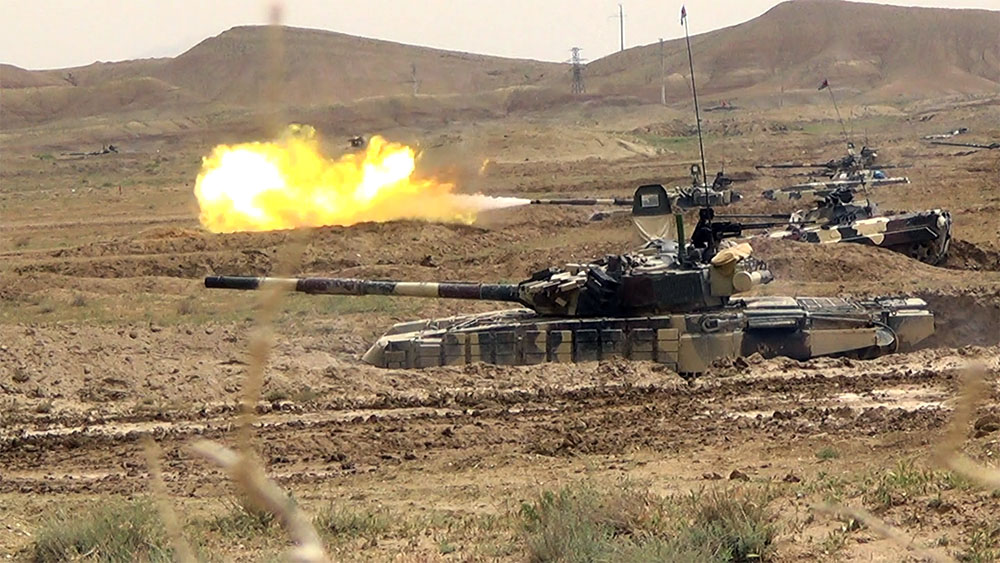 Azerbaijan has commenced large-scale military exercises today, 18 of September 2017, which will continue until 22 September. The number of troops mobilised in this years exercise is quite smaller than previous years and stands at 15.000, with around 150 tanks and armoured vehicles, 120 different artillery and self-propelled artillery systems as well as around 20 aircraft, helicopters and drones. Other military equipment also being used include radars and similar high-technology computerised systems.

This time though, Baku displayed a new set of self-propelled DANA 155mm artillery vehicles it had purchased from Czech Manufacturer ZTS, who has produced these since the late 1970s. It is reported that these mobile artillery vehicles have maximum shooting range of around 20 km, with a maximum speed of around 80 km/h. Another vehicle, also Czech-produced, the RM-70,  was exhibited during the drills. This latter is a heavier version of the Soviet BM-21 Grad multiple-launch artillery system. It is thought that Baku had purchased up to several dozen of both vehicles in 2016.

This the fifth large-scale military exercise conducted by Baku this year. In April around 30.000 troops were mobilised during the 5-day drills which included around 250 tanks, 200 artillery and missile systems, and around 25 aircraft. In May, Baku held live-fire drills with its Turkish counterpart, while between 19-24 June, Baku held yet another set of military drills with the participation of around 23.000 troops, 30 combat aircraft, 120 tanks and 180 missile and artillery systems. At the same time, between 12-16 June 2017, Azerbaija

n and Turkey jointly conducted a series of military drills in Nakhichevan, aiming to develop military cooperation.  So far, Baku has conducted around 4 large-scale military exercises this year, not counting smaller-scale drills done jointly with neighbours such as Georgia and Russia. For the time being, no further footage on the military exercises has been officially published.

Footage from the Azeri Defence Ministry showing the newly-obtained vehicles