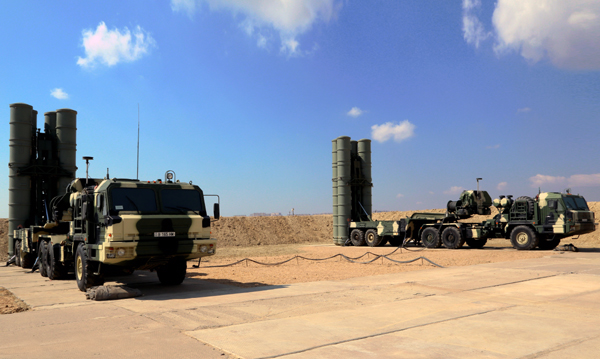 The location of Azerbaijan’s S-300s remained unknown for some time. It was assumed that they would be located near Baku to protect the Azerbaijani capital, along with its oil and military infrastructure from possible Armenian missiles in the case of all-out war. Experts also highlighted the fact that the new S-300s would most likely replace older Soviet-era S-200 and could possibly be deployed in the vicinity of the Mingechevir dam.

One year after being made public, S-300s were spotted in satellite photos in 2012 at a military base near city of Sarukhani, around 45 km north-west of Baku, where S-75 SAM’s lie abandoned. The division consisted of two batteries, each with 4 launch vehicles. The importance of their location was not an accident; they were located in the vicinity of one of the biggest military bases in Azerbaijan, the Nasosnaya Air Base, the Central-Chai Air Base, the strategic Nasosni and Gilazi ammunition depots.

Sarukhani military base near Baku

However, in later satellite photos (starting 2014) the S-300s had apparently disappeared from the aforementioned military base, along with their auxiliary radar-tracking and power-generating vehicles. Despite their disappearance, the base itself had not changed, all of its installations remained intact.

S-300 launching base west of Baku

Starting 2013, the Surakhani military base underwent a series of renovations. The additional facilities at the base came to house two batteries of S-300 missile complexes. Indeed, S-300s reappeared at the base. In the second half of 2014 a series of S-300 missile complexes appeared to be stationed there, with four launch vehicles. In 2015 however, according to satellite imagery, several launch vehicles had disappeared from the base.

At the end of 2015, the S-300s appeared at a new site on the outskirts of Baku to the west, near the village of Qobu. The new base is located on a hill overlooking Baku and the surrounding cities and villages.

Between 2009-2012, what appear to be S-300s were spotted next to the construction site of a naval base being built in the south of the Absheron peninsula, near a district of Qaradağlı. Some speculate that some S-300s were moved here temporarily, as in 2012 some missile complexes were spotted, but subsequently moved from the area. 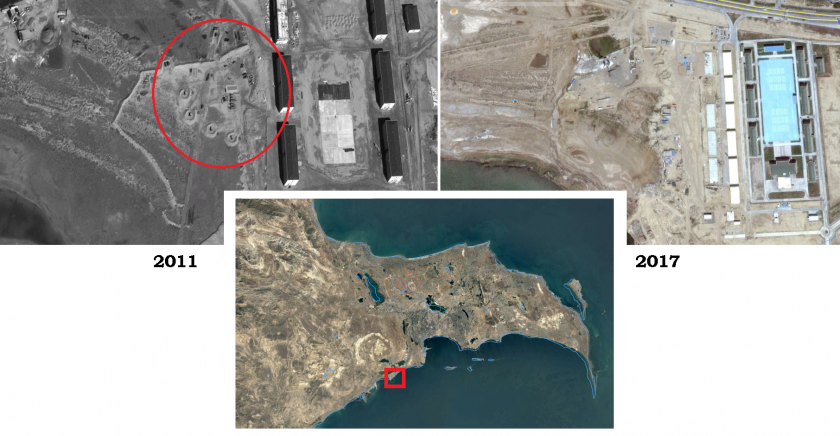 According to the Russian-based  Centre for International Arms Trade Analysis (CAWAT), Azerbaijan purchased S-300s from Russia, each with 8 launching vehicles. The $300 million deal was signed in 2007 and supplies started arriving in 2011.

Azerbaijan demonstrated its Russian-produced S-300 anti-aircraft missile system for the first time during a military parade on 26 June 2011 in Baku. During the event, several essential pieces of armament were made public, a 5T58 transfer and charging station, as well as two firing  vehicles.

S-300s are an important part of Azerbaijan’s and Armenia’s strategic arsenal. Both countries were supplied by their northern neighbour, Russia. With scarce unclassified sources regarding these weapons, online satellite imagery has come to be an effective way to track not only these, but other strategic weapons.