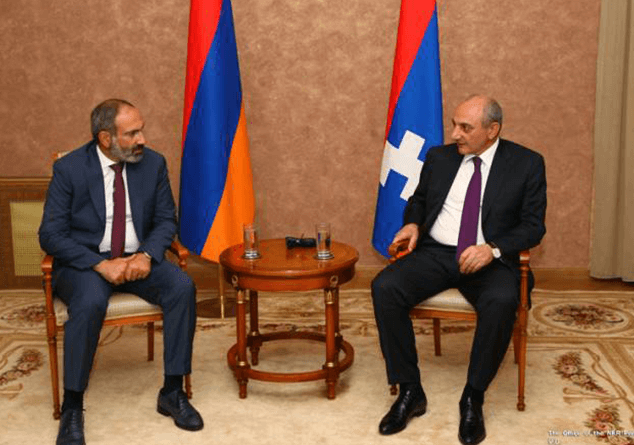 The acting Armenian Prime Minister (PM) Nikol Pashinian paid an official visit to Stepanakert to meet with his counterpart Bako Sahakyan. The two discussed bilateral co-operation between Armenia and Karabakh. Present during the meeting were other high-ranking government and military officials from both sides.

Among the issues discussed were military capabilities, further co-operation in different  strategic and tactical realms. It is worth mentioning that Yerevan itself has yet to officially recognise Stepanakert as a soverign state, however, in practical terms, such recognition is present in every-day occurences between the two. Acting PM Pashinian’s visit comes just days after U.S. Security Advisor John Bolton visited the region. During his visit to Armenia references were made about  the new Armenian Government’s potential for further efforts in the Karabakh issue with Azerbaijan. PM Pashinian has visited Stepanakert on numerous occasions since taking office earlier this year.

Such official visits create credibility issues in the eyes of Azeri officials, particularly the country’s leadership. Increasing visits by Armenian officials to what Baku considers its occupied territories has been met with frustration in sectors of Azeri society, who come to question their country’s leadership’s capabilities, despite heavily investing in arms and defence procurement.