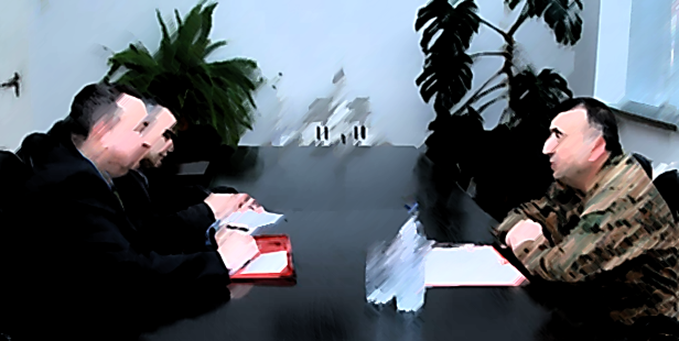 The International Committee of the Red Cross (ICRC) in Nagorno Karabakh met with the head of the armed forces of the latter, Maj Gen Karen Abrahamyan.  Maj Gen Abrahamyan received the head of ICRC’s Nagorno Karabakh programme, Pierre Emanuel Ducruet, during which a series of questions related to bilateral co-operation and new prospects for this year.

Both, the Ministry of Defence and the ICRC, praised on another and expressed their positive attitude regarding the results hitherto of working together. It is worth mentioning that the Red Cross has played  and continues to play an important role in the repatriation of fallen or captured soldiers on either side of the line of contact, along with acting as a liaison between captured soldiers and their respective governments.

Recent significant incidents of the kind include the repatriation of the body of Azeri serviceman Cingiz Qurbanov in early 2017.   During the 2016 April war, the ICRC also assisted in searching and repatriating bodies of fallen soldiers to both sides.  Earlier this year, the parents of  Armenian prisoner Karen Ghazaryan, who reportedly crossed into Azeri territory last July, sent him food and clothing through the ICRC. Activites similar in nature have been carried out numerous times by the ICRC on both sides.