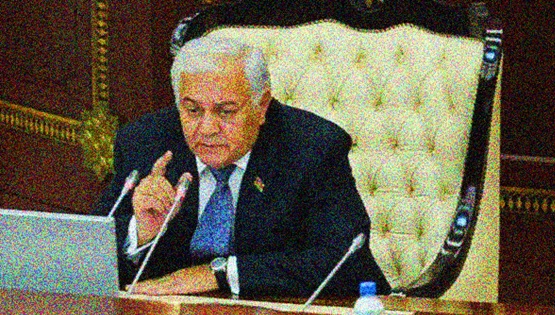 Azeri Parliament Chairman: “if we can resolve the conflict through peace, why should we call for war?”

In the latest developments, on Wednesday, the Chairman of the Azeri National Assembly (officially known as the Milli Məclis in Azeri), Oktay Asadov,  made a rare statement during a parliamentary session.

As a response to Faraj Guliyev’s calls for military actions to resolve the Nagorno Karabakh conflict, Oktay Asadov stated the following:

We consider the inhabitants of Nagorno Karabakh as citizens of Azerbaijan. If a foolish Armenian minister comes out and says we will occupy Azerbaijani lands [referring to Armenia’s Defence Minister’s statement on 01 April 2019 in New York], we should not react in such a way.  In an attempt to undermine Azerbaijan’s agreements with the European Union, Armenia is trying to provoke  Azerbaijan…

Will we get something out of calling for war? If  we can resolve the conflict  through peace, why should we call for war? Why should we reject this path. This is a provokative act and we should not go with them. The Karabakh issue will be resolved within the territorial integrity of Azerbaijan. There is not other way but this. I kindly ask you make no emotional speeches”

Although the interest in a peaceful resolution by such a high-profile figure as Mr Asadov is important, in  that it comes from an influential figure in the high echelons of power, it will not necessarily change the approach that each side sees as a means of resolving the conflict, be it through peace or military means.

It is worth noting, that Mr Asadov, the head of Azerbaijan’s parliament since 2005, was born in the southern Armenian village of Arevis,  3 km from Heydar Aliyev’s fathers village of Tanahat. The two apparently knew each other from Soviet times with the latter unofficially forming part of the Nakhichevani clan that has dominated politics in Azerbaijan since the early 1990s.