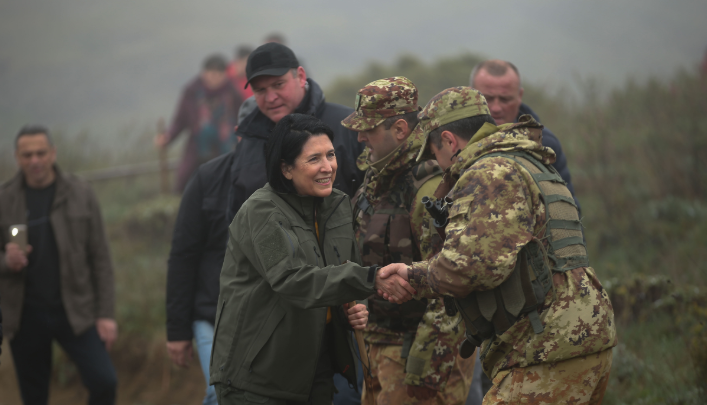 Earlier this week, Georgian officials accused Azeri border guards of closing access to the David Gareja monastery complex. The monastery lies on the border between the two countries and has been subject to an almost three-decades-long spat between the two sides to delimite the border. On the previous day, on 20 April, Georgian President Salume Zurabishvili visited the monastery, meeting with local priests and border guards, during which she stated that the border dispute must be resolved in a quick manner.

The event comes as a surprise, as the two sides have kept quite regarding their border disputes, which, apparently is only 64% resolved, leaving 36% of the border still in dispute, according to pro-government Azeri daily Haqqin.az. Azerbaijan is the biggest investor in Georgia in terms of oil and gas infrastructure, normally such incidents do not take place, but the fact that this time the border was closed down one day after Zurabishvili visited the area does not seem coincidental.

The last time a major incident took place was in 2012, when Azeri border guards shut down the access route on the Georgian side, causing massive protests in Tbilisi and elsewhere in the country. Nonetheless, no military means were used in neither case and the incidents were resolved through diplomatic means.

2019-04-26
Previous Post: Azeri Parliament Chairman: “if we can resolve the conflict through peace, why should we call for war?”
Next Post: Armoured and artillery units conduct live-fire training in southern Nagorno Karabakh