Armenia’s defence minister Davit Tonoyan visited a military outpost on the Armenia-Nakhichevan border to follow-up on the latest developments, security-operational situation, monitor Azeri troop movements and the latest renovation projects on military outposts conducted by Armenian troops on this segment of the militarised border. Finalising his visit, officials reported that minister Tonoyan also duly gave orders to the troops.

The official report was not published on the Defence Ministry’s page, but on the Facebook account of its spokesperson, Artsrun Hovhannisian.

Description: geospatial analysis results showing the location in the picture 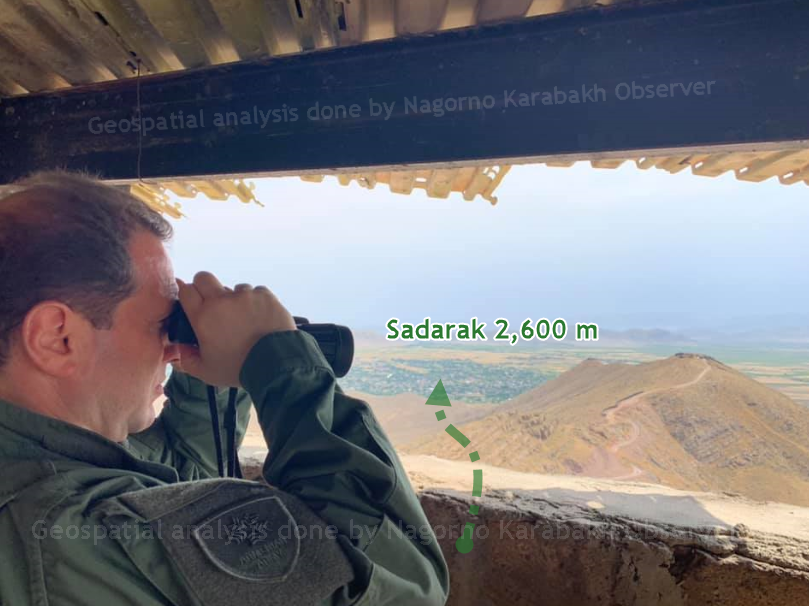 The military outpost in question is opposite to the town of Sadarak in Nakhichevan, which lies 2,600 metres to the south. In this segment of the line of contact, Armenians have higher ground, with the closest Azeri outpost being approximately 1,400 metres.  The majority of military outposts on this highly-militarised area of the border lie around 300 metres from each other, with some as close as 130 metres.

Geostrategic conditions on the Armenia-Nakhichevan border

It is worth nothing that this area of the border has an extremely high geostrategic importance for both sides, in that it is the only segment along the Armenia-Nakhichevan border that is not straddled in mountains;  it is a 9,5 km segment of the 220 km long border between Armenia and Nakhichevan that is easily accessible to armoured vehicles and large troop movements, while the rest of the border consists of high mountain ranges above 1,5o0 m, that reach altitudes over of 3,500 m at several points.

In case of large-scale military operations, military authorities in Baku could possibly use this as a point of attack on Armenia’s capital Yerevan, which lies just 63 km north.  Non-official estimations put the Nakhichevan military garrison at around 15.000-20.000 troops, with a local military doctrine focused more on defence than offence, nonetheless, offensive weapons are also present in the military. Armenia on the other hand, has stepped up its military build up around this area with high-technology anti-air and anti-tank weapon types in recent times.

Images provided by the Defence Ministry of Armenia