Yesterday, the units from Azerbaijan’s air force carried out live-fire drills with Su-25 combat aircraft. The drills included both, daytime, as well as nocturnal simulations. Official publications from the Defence ministry stated the fighter unit attacked training targets with different armament types, including bombs and air-surface rockets. The drills were aimed at strengthening and maintaining combat-readiness at a high level. 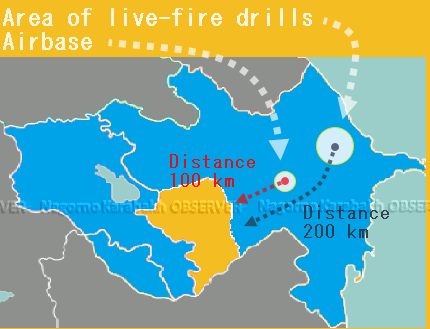 While military officials in Azerbaijan did not disclose the location of the airbase or training ground, through geospatial analysis, it is highly probable that the airbase in question is the Kurdemir airbase in central Azerbaijan. While the training ground is most likely a military training area located between the districts of Gobustan, Khizi and Absheron, a common area for live-fire drills, particularly involving aircraft.

Open-hangers, built in 2017 are visible at the Kurdemir Airbase housing Su-25 aircraft, designated Frogfoot by NATO. The aircraft, of Soviet/Russian-production, are widely used by militaries around the world, including Armenia, Azerbaijan and Georgia. Su-25 Frogfoots are multipule-purpose aircraft that are used in close co-ordination with units on the ground for close-air support, with a maximum range of 1.300 km depending on the payload. These aircraft are known to have seen action during the 1990s Karabakh war, particularly by Azeri units against Armenian ground troops.

Official photos of the event provided by the Azeri Defence Ministry