On Thursday, a report from the State Border Service (SBS) of Azerbaijan stated that Armenian troops fired on a military supply vehicle behind their military outposts. According to the report, the incident occurred at border outposts between the villages of  Ferehli in Azerbaijan and Koti in Armenia, which lie barely two kilometres apart, but are divided by a heavily militarised border.

No injuries were reported during the incident, but it comes amid particularly heightened tensions between the two countries on this particular segment of the border.

A brief analysis of the area shows that Azeri SBS troops maintain higher ground for around 6 km of the militarised border in the area, except for a few areas where Armenians have the higher ground. While the location of this incident was not stated in the report, it is possible the shots came from a military outpost overseeing the area approximately 1,190 metres high. The vehicle from that point would be visible in several locations, but judging from the damage in the picture, the vehicle was facing the source of fire; this would put the vehicle on one of two possible locations, both crossroads on a dirt road leading to Azeri military outposts.

Possible areas of interest regarding the incident, approximately 850 metres from Armenian military outpost 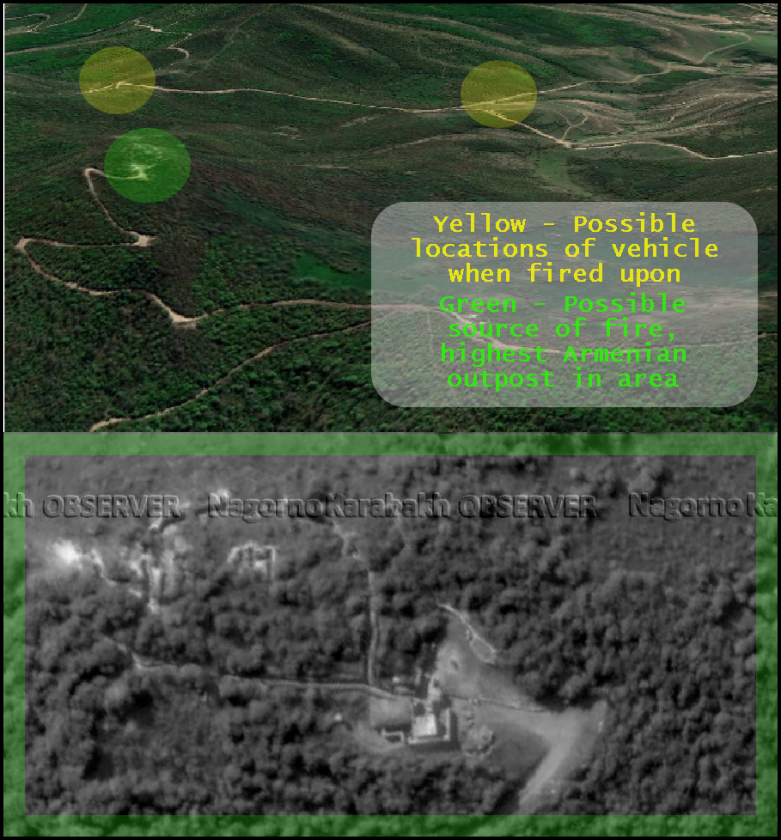 No official statement was provided by Armenian military officials on the incident. But similar incidents have been reported in the past, one particular incident involved reports of Armenian troops firing on an Azeri excavator conducting renovation works near military outposts 6 km north of this location, near the village of Keremli in January of this year.