Turkey planned a military operation against Armenia code-named ALTAY, according to a secret memo that reported missing pages from classified documents which detailed action plan.

The internal memo, submitted to the General Staff and a copy of which was obtained by Nordic Monitor, stated that the plan was still valid.

According to the memo, dated May 23, 2016 and presented to the General Staff by the Directorate of Operations, some of the pages that included air strike operations against Armenia called OĞUZTÜRK Hava Harekât Planı (OĞUZTÜRK Air Operation Plan) had gone missing. The discovery was made during a review of the plans at the Controlled Documents Bureau by the 4th Main Jet Base Command at Ankara’s Akıncı Air Base. A legal investigation was launched into the incident.

First page of the memo (parts not related to this news report have been redacted): 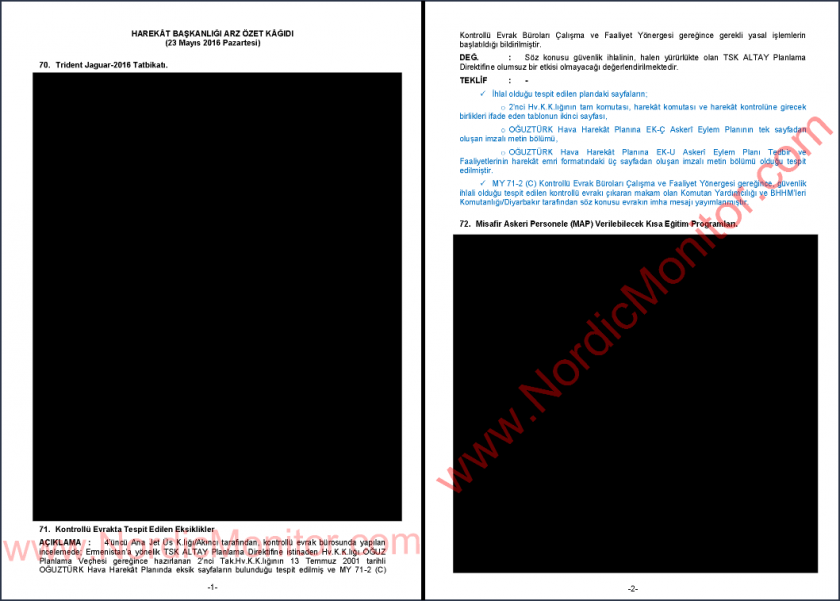 According to the short memo drawn up by the inspectors to brief the General Staff, the secret plan was finalised on July 13, 2001. It was prepared by the 2nd Tactical Air Force Command as part of the OĞUZTÜRK air offensive plan of the Turkish Air Forces in order to complement the Turkish Armed Forces (TSK) directive code-named “ALTAY” for an offensive against Armenia.

The memo stated that the action plan was still valid and underlined that the violation would not have a negative impact on the TSK’s ALTAY directive.

The missing pages included the following details: the second part of a table that showed which military companies would be placed under the command of the 2nd Air Forces Command; the last page of the military action plan in the attachment “EK-Ç,” which was part of the OĞUZTÜRK Air Operation Plan and showed the authorizing signatures; a three-page attachment marked “EK-U” that detailed operation orders within the framework of the Military Action Plan Measures and Activities.

It appears that the ALTAY plan was a general action plan drawn up by the TSK and that each force command had its own part under the directive.

The memo does not mention details of either the ALTAY directive, which appears to have been a general military plan for Armenia, or its air force part, OĞUZTÜRK. It did not say how those pages from the secret plans went missing.