According to official publications from the Armenian and Azeri Defence Ministries, as well Azerbaijan’s State Border Service, border skirmishes took place today between the two sides. The exact places were the incidents are reported to have occurred are slightly different in each statement, but all conclude that it eventually ended. 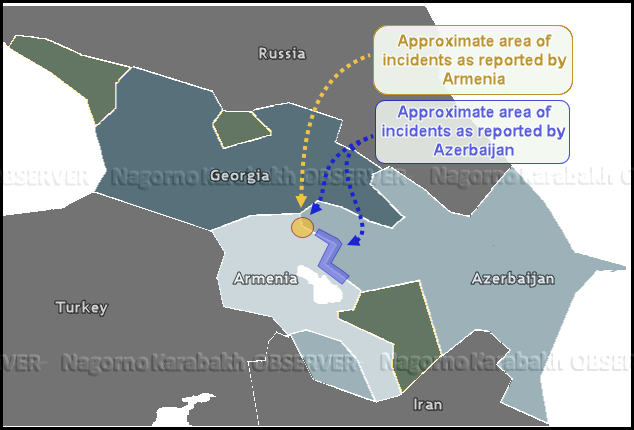 The spokesperson for Armenian’s Defence ministry, Artsrun Hovhannesian, published a statement at 10.49 hours  about Azeri border troops opening fire on a major road to the east of Armenia, leading to Georgia, a translated version of the statement read:

In a subsequent statement, the spokesperson mentioned another similar incident that took place at around midnight the same day, stating:

Yesterday around midnight the Azeri AF [Armed Forces] continued to fire on the mentioned segments of province of Tavush of the RA [Republic of Armenia]. They ceased fire only after response fire from the RA AF.

Different calibre weapons [and] machine guns. There were no injuries.

The highway fired upon in Armenia is the major highway linking the east of the country with Georgia and the main route to Tbilisi. Periodically it has come under fire in the past, as some segments of it pass just over 700 metres from Azeri positions.

Officials at the Azeri State Border Service one day later at 08.53 hours announced that several skirmishes had taken place, stating:

Fire was returned on the adversary’s positions.

Azeri Defence officials also commented on the incidents, stating that the areas affected on the border were military positions near the villages of Shavarshavan, Krasnoselsk (Am. Chambarak) and Voskevan in Armenia,  Farahli, Ashaghi Askipara and Bala Jafarli in Azerbaijian, as well as other mountainous positions in the Gazakh and Gadabay provinces. The statement read:

During the day, units from Armenia’s armed forces violated the ceasefire 23 times in different directions of the front [referring to the border and line-of-contact] using large-calibre machine guns and sniper rifles.

It is worth nothing that in Azerbaijan’s case, while military positions on the northern segment of the internationally-recognised border is manned by the heavily militarised State Border Service, the remaining positions are under the watch of the country’s armed forces; hence the two separate official statements from the Azeri side regarding the incident. 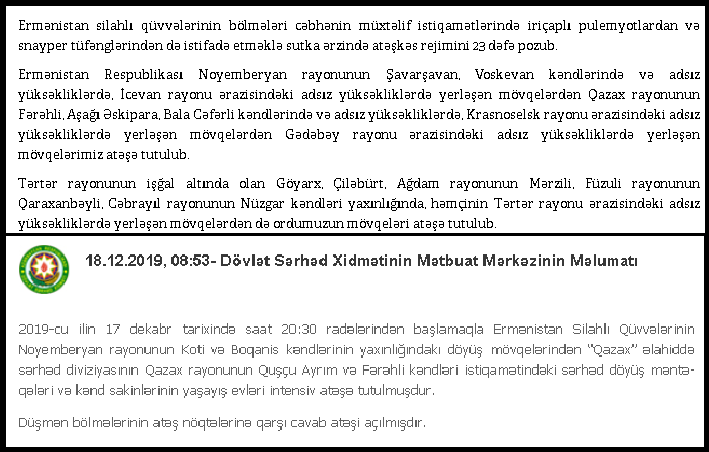 No further details were provided as to damage or injuries.

Additionally, a local Armenian media outlet News.am provided what it reported as a brief video of the the cross-border fire near the village of Koti. The video appears to be an amateur video, nonetheless, shots can be herd in the background. In addition to the latter, several other media outlets, Armenian (1, 2) and Azeri (1, 2) also covered the incident, without any significant details other than those mentioned in the official statements.

Local media footage of the shootout near Koti, Armenia