On 18 December, according to official Azeri sources, a ceasefire monitoring mission was conducted by the Organisation for Security and Cooperation in Europe (OSCE)  on the Armenian-Azeri border. The exact location was not specified, but it was mentioned to have taken place on the 34km segment of the border with the Tovuz region of Azerbaijan.

A map of the Caucasus showing area of monitoring (red) 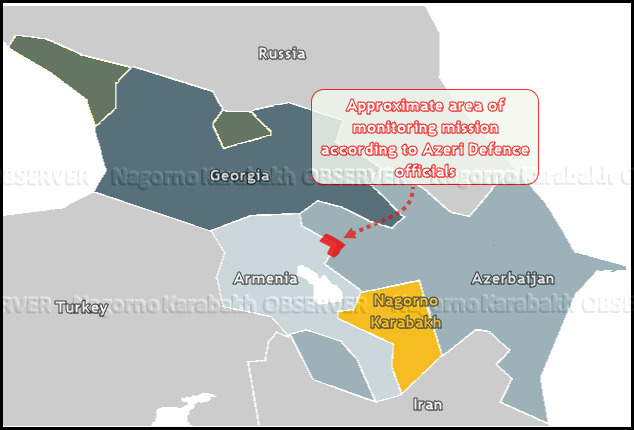 Interestingly, no Armenian media appeared to report on the incident, a rare occurrence, the reason for which remains undetermined.

The Azeri side however did report on it, initially the country’s Defence Ministry provided a statement mentioning that no major incidents took place during the event,  followed by local media echoing the text. Local media also added that on the Azeri side, OSCE representatives Simon Tiller (UK) and Ghenadie Petrica (Moldova) were planned to carry out the monitoring. While on the Armenian side, the task corresponded to Ognjen Jovic (Bosnia and Herzagovina), Mihail Olaru (Moldova) AND  Martin Schuster (Germany)

This is the 20th ceasefire monitoring mission conducted this year and the third near this same area, known for numerous ceasefire violation incidents and skirmishes in the past.