Between 6 and 11 January of this year, at least 25 flights involving six Airbus A400 and two C130 aircraft registered as belonging to the Turkish Air Force were spotted flying betweet Turkey and Azerbaijan. The flights followed specific patterns, almost all originated from Kayseri airbase in central Turkey and landed in Yevlakh, Lenkeran, Nasosnaya Airbase or Baku International Airport. An analysis through online flight tracking tools such as Flightradar24 revealed details of the flights, although the exact cargo remains unknown.

According to official specifications of both the Airbus A400 and Lockheed C130, the total carrying capacity of the 25 flights combined was around 5,000 tonnes of military equipment or up to 15,852 troops, although the specific cargo that quantities carried remains unverifiable through open sources.

During the first three days, the destiniations in Azerbaijan were the same for all flights: on 6 January Turkish aircraft landed in Yevlakh, 7 January Lenkeran and 8 January Baku.

On 6 January, four flights appeared to land at Yevlakh airport in Azerbaijan originating in Kayseri airbase, Turkey.  All flights involved Airbus A400 transport aircraft on this day.

Three registered flights on 6 January of aircraft with registry numbers 16-0055, 15-0051 and 18-0094 having departed Yevlakh, Azerbaijan, all headed back to Dalaman airbase in southwestern Turkey 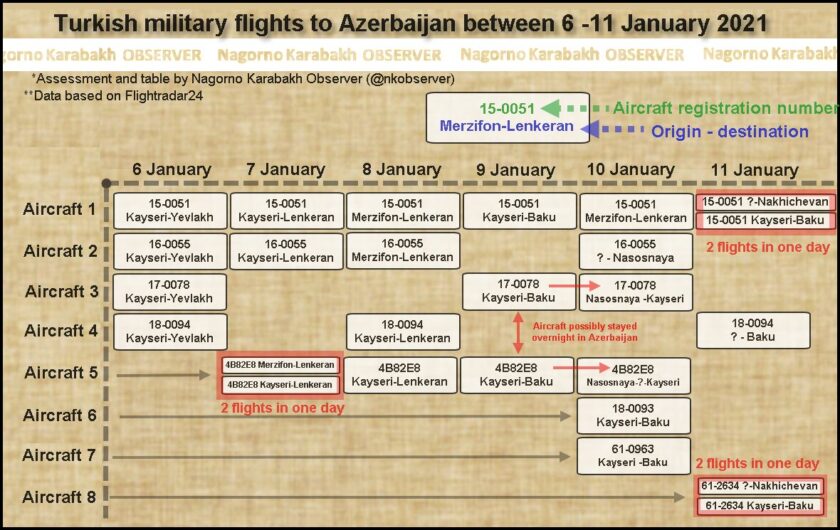 Two flights to the Nakhichevan exclave on 11 January

Flights were mainly headed to mainland Azerbaijan, but on 11 January, two flights were spotted landing at Nakhichevan’s only airport, used for civilian and military purposes. The aircraft, a C130 and A400, entered the exclave´s airspace at around the same time and departed within three hours of landing. The airport of origen of these aircraft remains unknown, but could possibly be either Kayseri or Merzifon.

It is worth noting that Kayseri Airport has both military and civilian installations. On one half of the airport lies the headquarters of Turkey’s 12th Air Transportation Command, one of two Air Transport Commands, with the other one, the 11th located in Ankara. 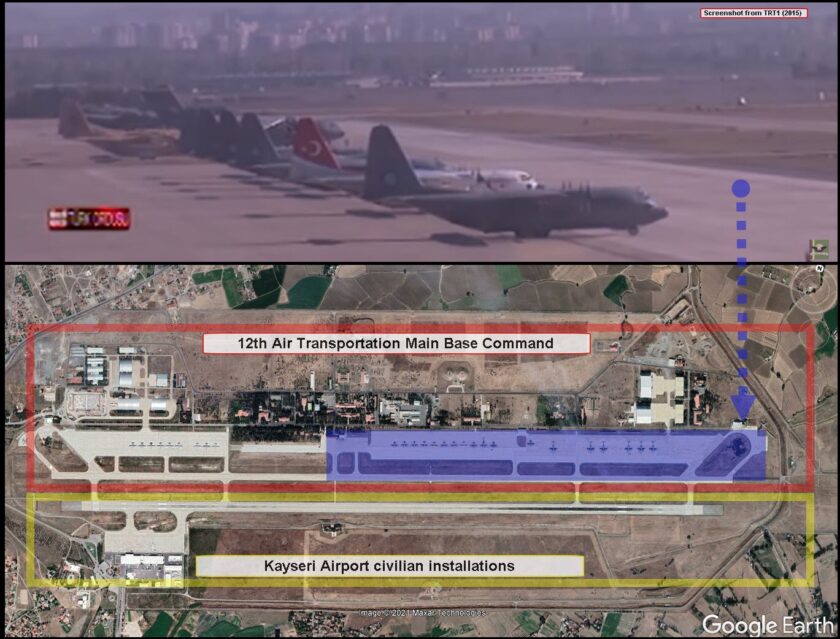 2021-03-01
Previous Post: Azerbaijan Defence Ministry ceases daily ceasefire monitoring
Next Post: A brief overview about the mine and UXO situation in Nagorno Karabakh