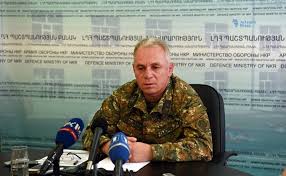 On 22 July 2017, Artsakh’s Ministry of Defence (officially called the Defence Army) published its biannual report regarding the developments on the line-of-contact.  With special monitoring mechanisms, the military authorities concluded that between January and July 2017 the ceasefire was was violated by Azerbaijan 9.000 times, with around 120.000 rounds of ammunition (including small arms, mortars, guided and unguided missiles, and launched grenades) being directed towards Armenian positions and village along the front line.

In this first half of the year around39 Azeri servicemen and 37 Armenian servicemen have died, more than half of them on the front-line in border skirmishes.

Pictured above are (from left to right) D-30 85mm howitzer, the Israeli Spike anti-tank missile and the Turkish-made TR 107 (107mm) rocket system.

2017-07-22
Previous Post: Aliyev and Putin meet in Russia
Next Post: Hospitalised Azeri soldier Nahid Soltanov has succumbed to his wounds