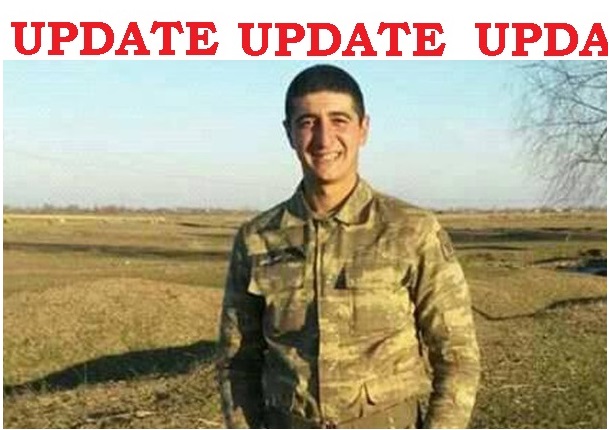 Hospitalised Azeri soldier Nahid Soltanov has succumbed to his wounds

News has spread of Azeri conscript Nahid Soltanov’s death from his woulds. His death was confirmed by his brother Elchin Soltanov to Azadliq News reporters  today.  Soltanov was buried in his village of Qizilburun near the city of Shirvan.

Meydan TV also obtained information on the case by the family, who still remains in doubt about what really happened. The identity of the other serviceman wounded with Soltanov has yet to be made public. In other occasions when names of injured and fallen soldiers surface on social media, no news whatsoever regarding this other serviceman is available. The only information obtained from the family is that “a fellow serviceman was also critically wounded and hospitalised”. Family members were told from undisclosed sources that their son was shot in the head by an Armenian sniper, while the other serviceman was shot in the chest. Some on social media already believe something more serious has happened and it was not a death cause by cease-fire violation.

Earlier, Soltanov’s brother told of his brother being transported along with a fellow serviceman to the Central Military Hospital in Baku, both in a state of coma with his brother having a head injury, while the other serviceman an abdominal injury.

Azerbaijan’s Ministry of Defence has yet to comment on the issue, nor has any other Government agency.