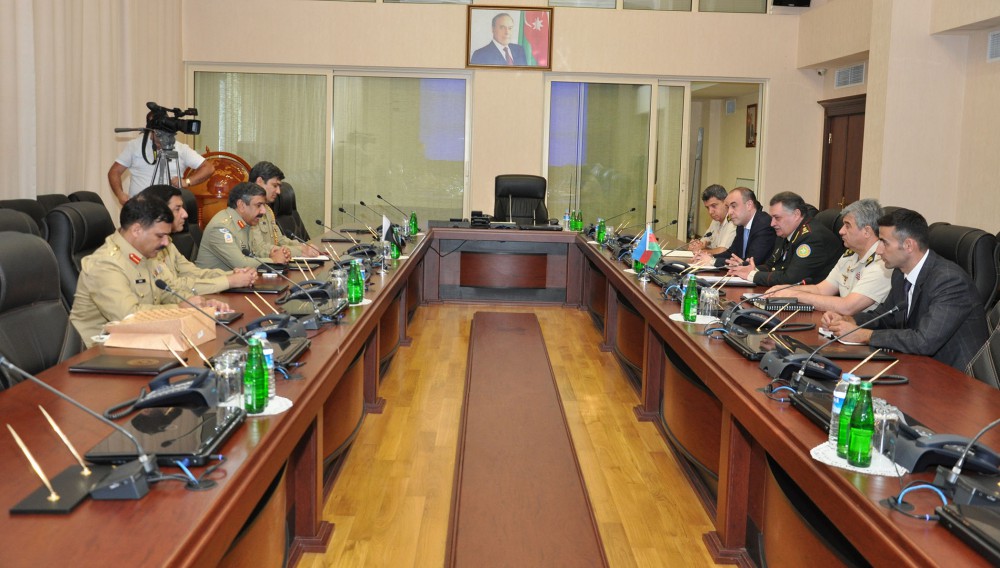 Published in a late July issue of Azerbaycan Ordusu as well as in a few media outlets, on 19 July 2017 the new head of Pakistan’s National Disaster Management Authority Lt Gen Omar Mahmood Hayat made an official visit to Azerbaijan. Details of the visit remain quite vague and are limited to the habitual “cooperation and partnership agreements” usually signed or discussed during every official visit.

General Mahmood Hayat met with his sub-counterparts at the Ministry of Emergency Situations  (Fövqəladə Hallar Naziri in Azeri, or anecdotally Ministry of Everything Significant (referring to the political power and property amassed by its leaders over the years)) in what appears to confirm long-time Emergency Minister Kemaleddin Heydarov’s absence from the ministry. The business tycoon ministry recently resigned from his position in unclarified circumstances. During the meeting Heydarov’s deputies Tapdiq Amiraslanov and Faiq Tağızadə took the lead role in his absence.

The Pakistani General also met with the Azeri Minister of Defence Zakir Hasanov and reportedly discussed the Karabakh and Kashmir issues. According to Baku, Pakistan fully supports Azerbaijan while the latter Pakistan in their territorial disputes.

An interesting thing to note is that the Pakistani General’s brother is the current Chairman Joint Chiefs of Staff Committee with close links to the Inter-Services Intelligence agency.  the second highest defence position in the country.

General Omar Mahmood Hayat also heads the conglomerate of  Pakistan Ordnance Factories a major regional arms manufacturer, and his visit is quite possibly aimed at establishing an arms-supply contract with Azeri authorities.  If not for an arms deal, it seems quite unlikely that such a high-ranking official representing the National Disaster Authority of Pakistan, or any other country, would pay a visit to such a distant country for discussing issues relating to internal affairs. It is most likely the development of an arms deal.