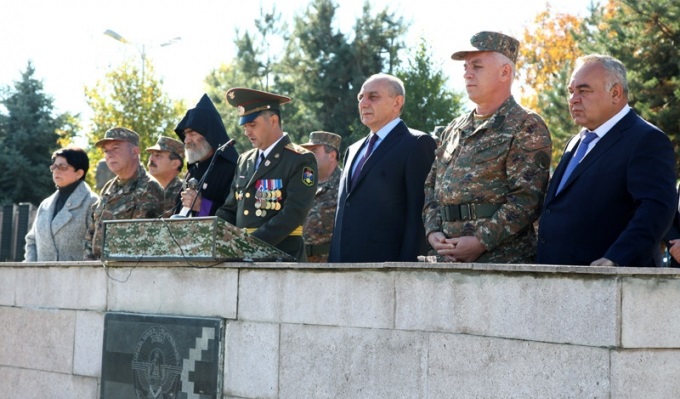 On 14 October 2017, de facto Nagorno Karabakh President Bako Sahakyan participated in the 25th anniversary commemoration of the founding of the special 8th Motorised Rifle Brigade. The event took place at an undisclosed military base with the presence of high-ranking political, military and religious officials, including Defence Minister Levon Mnatsakanyan and Archbishop Pargev Martirosyan.

The 8th Motorised Rifle Brigade, which carries the name of late Armenian Defence Minister Vazgen Sargsyan, carried out numerous combat operations during the first Karabakh war in the 1990’s as well as others during the 2016 April war. The military unit is known for its numerous victories under difficult conditions, and also having lost many prestigious soldiers during battles.

The event is commemorated yearly with the participation of veterans, as well as current members of the military unit.

2017-10-16
Previous Post: “If need be I will live in Armenia, but I will not live with this government” – Azeri Refugee
Next Post: Aliyev-Sargsyan meeting in Geneva