Azerbaijan’s highest authority, president Ilham Aliyev, announced  the starting of large-scale military exercises between 11-15 March. The announcement can be found on the Defence Ministry’s official webpage, made on 08 March.

According to official news, the military exercises are will include scenarios aimed at attacking a decoy enemy in several directions, breaking enemy defences as well as posterior military groupings. Artillery units will be used to simulate attacks on military objectives deep behind the battle front.

In the past, major military exercises have normally lasted around 5 days, and have involved the simultaneous participation of infantry, armoured, artillery and aviation units.  By far, the number of personnel participating in this upcoming series of exercises is the smallest in the past several years, nonetheless, the amount of armoured vehicles is the highest according to open sources; from this information, the emphasis this time seems to be put on an attack scenario using armoured vehicles, with artillery support using the least amount of infantry possible, thus relying mainly on high-technology fast-moving tactics.

Some experts argue that such scenarios also show that Baku is seeking to test out different tactics, with a focus on its recently acquired high-technology products.

(classified by number of personnel participating)

*SOURCE:   Ministry of Defence of Azerbaijan 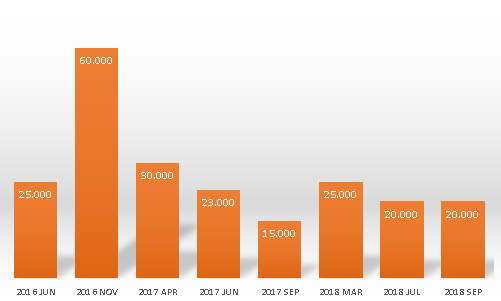