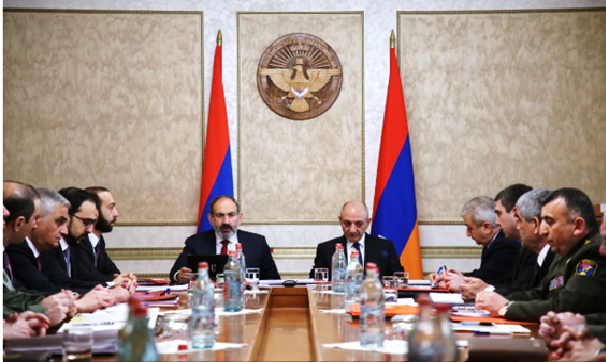 The de facto Nagorno Karabakh (NK) President Bako Sahakyan received Armenian Prime Minister Nikol Pashinyan on what was the latter’s official visit to Stepanakert. On 12 March, the Security Council’s of both leaderships headed by Sahakyan and Pashinyan met for consultations on a series of issues.

Both sides agreed on the prioritisation of guarenteeing Nagorno Karabakh’s security and status.  Other important points mutually stressed by both sides were the importance of a peace-friendly environment, preventive mechanisms aimed at a decreasing security risks and steps to build-up mutual confidence.

The issues discussed were derived from the prospects for a pacific solution to the conflict over NK, and included a consolidated opinion of events between the two leaderships.

Representatives of the two Security Councils exchanged opinions on NK’s defence capabilities and mutually expressed their willingness towards a proactive attitude towards the OSCE Minsk group and international law, particularly self-determination principles.

During the meeting, President Sahakyan stated, “Artsakh [Nagorno Karabakh] is ready to continue its constructive efforts in the negotiation process in the region to establish an indefinite and stable peace”, and mentioned that upholding the trilateral ceasefire agreement of 1994 will contribute to a peace-friendly environment.

Armenian Prime Minister on his part brought forward that “Armenia continues to remain loyal to the negotiation process, and as a security guarantee for Artsakh, will continue to implement efforts with that in mind, at the same time, in order to uphold the complete values and productivity of the peace process, Artsakh’s voice and participation remain at the top of the agenda”

The two leaders also held one-on-one talks accompanied by the heads of their respective Security Councils and foreign ministers.