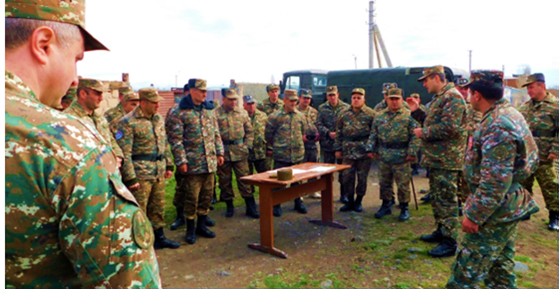 Three years after the first major clashes on the line-of-contact between Armenian and Azeri forces in Nagorno Karabakh after the 1994 ceasefire, the two sides appear to be well aware of difficulties of stability in the region.  A series of military simulations and training sessions were conducted by different units in the Armenian Armed Forces this first week of April.

The same week saw further training for anti-air defence units within the 2nd Army Corps using MANPADS. The drills were brought in line with a co-operation and mutual support scheme between artillery battery groups as well as other organisational units such as platoons and sections. Besides the latter, this week gave start to a one-month instruction and practice programme with artillery units from the 1st Army Corps. The aim is to perfect and further develop firing methods using high-calibre artillery in field conditions.

Elsewhere in the military, consultations were underway between high and low-ranking officers within the 4th Army Corps. Participating in the event were the heads of logistical affairs and similar structures with support roles.