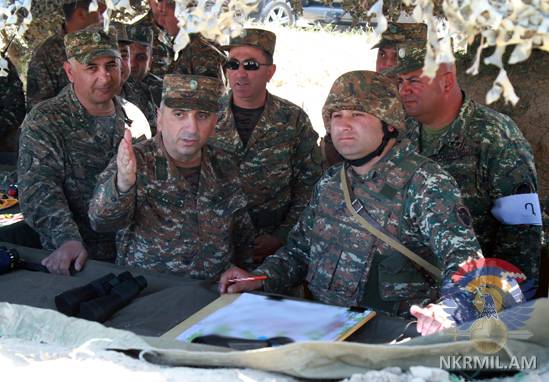 Reinforced military units involving armoured tank battalions participated in live-fire exercises at the Tigranakert training ground. The event was supervised by the commander of an undisclosed military base, Col Ashot Aghajanyan, while observing was the Defence Minister Maj Gen Karen Abrahamyan. Also present were commanders and officers of the participating units.

An aerial view of the Tigranakert training ground

Starting the exercises, the troops were quickly brought to alert, in what is a pre-condition during any combat operation, manning each unit their respective positions.

According to official statements from military authorities in Stepanakert, the troops successively carried out defence and offensive operations during this live-fire stage of combat exercises. The units also tested out modernised weapon types and approaches, stopping the adversary’s advances, thereupon taking the initiative during offensive combat simulations.

Photos from the event from official publications of the Defence Ministry

Officials valued the troops performance, stating that they displayed persistency and co-ordination, something that yields confidence in their skills, knowledge and capacities proving that they are ready not only for simulations, but “if needed, a show of their force during real combat conditions”.

This last statement is significant, in that it indirectly brings about the possibility of further armed conflict and mentions simulations done for offensive (as opposed to a counter-attack) during military operations.  While the “reinforced” term used in the official notification could possibly reference the Armenian Defence Minister’s, Davit Tonoyan’s,  statement in March of this year, in which he hinted at strengthened military units to that would move military operations in the adversary’s territory.

A video of the event can be found here

2019-06-03
Previous Post: Small or large military exercises? A briefing of what each one means
Next Post: Latest ceasefire violation reports