Another interesting development in the region took place on 04 June, with an official meeting between the foreign ministers of Armenia, Cyprus and Greece in Nicosia, Cyprus. This was the first meeting of its kind and highlighted the importance of the warm relations of the three countries according to official statements by the three foreign ministers.

The three sides discussed a series of questions  aimed at developing trilateral in the realms of trade, investment opportunities, agriculture, education, science, information technology and innovation, health, crisis management, culture and tourism. Besides the latter, special mentions were made on geopolitical issues regarding Turkey and Nagorno Karabakh. In the official joint statement, the following was mentioned:

“..The Ministers had an exchange of views on the Cyprus problem and the violations of the EEZ of the Republic of Cyprus by Turkey, the Nagorno-Karabakh conflict and the efforts to reduce tensions under the auspices of the OSCE Minsk Group Co-Chairmanship, and the implementation of the Prespa Agreement. They also discussed international issues and topics of common interest and concern…”

Official photo of the talks 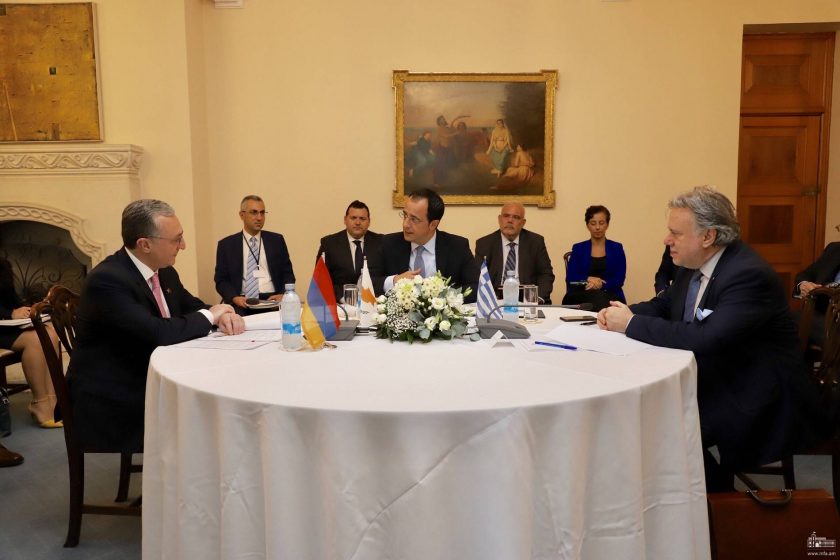 Armenia’s Foreign Minister, Zohrab Mnatsakanyan,  in his statement made no reference to Nagorno Karabakh, Turkey nor other precise regional issues, but did underline that the three together can contribute to regional stability through means of cooperation. Mnatsakanyan further described the two nations (Greek and Armenian) as:

“…It’s a historical friendship, it’s a civilisational value-based friendship, which we, as sovereign states, as nation states, translate into pragmatism, into cooperation to the benefit of our nations and our peoples. And I also want to emphasise that this is a cooperation, the objectives of which are peace, stability and cooperation for us and for the region…”

The Cypriot Foreign Minister, Nikos Christodoulides, on his behalf directly mentioned Nagorno Karabakh and Turkey in his official statement, particularly mentioning the recent tension between Cyprus and Turkey with the latter apparently violating the former’s exclusive economic zone (EEZ) through oil drilling(see here for official details on the issue), expressing:

“…Today, I also had the opportunity to brief my counterparts on the latest developments regarding the Cyprus problem, as well as on Turkey’s escalated illegal activities in the Exclusive Economic Zone of the Republic of Cyprus, in violation of the Republic’s sovereign rights and International Law. Moreover, we had the opportunity to exchange views with my two colleagues on the Nagorno-Karabakh conflict and on the implementation of the Prespa Agreement, and to discuss, as well, the relations between the European Union and Armenia…”

Official footage of the meeting

Greece’s Foreign Minister, Georgios Katrougalos, made no direct reference to Nagorno Karabakh, but mentioned Turkey and recent tensions in the Mediterranean.  He did mention that they envisage a further improvement of the trilateral relations between the three, and underlined that EU-Armenia relations have been at the forefront of their discussions. Subsequently, the following was mentioned in his speech:

Both the Greek and Cypriot side made direct references to Turkey, while only Cyprus directly mentioned Nagorno Karabakh. Nonetheless, in the final joint statement, both were mentioned and emphasis has been put on subsequent meetings between the three countries, with the next meeting being planned at an undisclosed date in Armenia.

In general, this can be seen as a traditional alliance between Greeks and Armenians against Turkey and Azerbaijan. The nations in question have a history of animosity amongst themselves for historical reasons, which has not declined over the years. Greeks, embodied in the Greek and Cypriot states, have tense relations with Turkey over territorial disputes and aerial incursions of Turkish military jets over Greek islands, while Cyprus still bears the scars of Turkey’s 1974 invasion in favour of bolstering the local Turkish minority through a de facto state, the Turkish Republic of Northern Cyprus, only recognised by Ankara. Coincidentally, the de facto Nagorno Karabakh shares similar difficulties as its Turkish echo on the northern part of the island of Cyprus.

While Cypriot Greeks and those of the mainland do not have direct historical animosity with Azeri Turks,  the Greek minority in Nagorno Karabakh, mainly in the village of Mehmana, had to be eventually evacuated by the Greek government at the time during an Azeri military offensive in the area in 1992, which captured the village, but changed hands at a later after an Armenian counter-offensive.