In: Armenia-Azerbaijan, Georgia, Nagorno Karabakh, Only Armenia, Only Azerbaijan, Regional

There has been a recent spike in ceasefire violation reports on the line-of-contact between Azerbaijan and de facto Nagorno Karabakh, and the border between Armenia and Azerbaijan, according to reports from defence officials from the three sides.

Defence officials in Nagorno Karabakh noted a significant drop in average daily projectiles fired as well as general ceasefire violations by Azerbaijan in their latest weekly report form 28 July-03 August. During that time, a total of 90 ceasefire violations were reported, with approximately 600 projectiles being fired on Armenian positions by Azeri troops, averaging a daily 86 projectiles. The average weekly projectile count for the past two months is 142, with a peak between 16-22 June of 286 daily shots, with the lowest being the last week of June and this past week, amount to 86 shots. According to ceasefire violation registries, projectiles fired during this past two months by Azerbaijan were of “diverse calibres”. 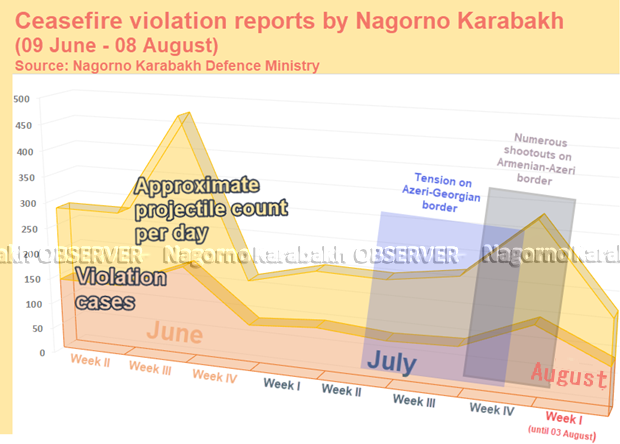 Azerbaijan on its behalf, ceased providing numeric data for ceasefire violation reports from 23 June-18 July, before and after which it had reported ceasefire violations by Armenian troops with sniper and heavy machine guns. According to their daily ceasefire reports, from 01-08 August, Azeri authorities registered a total of 162 violations from the Armenian side, both from Armenia proper, as well as the line-of-contact with Nagorno Karabakh. These numbers are relatively higher than previous weeks, with little difference. Azeri reports stated that high-calibre machine guns as well as sniper rifles were used in some cases, including eight mortar shells fired on 18 June, which remains unconfirmed through non-official sources. 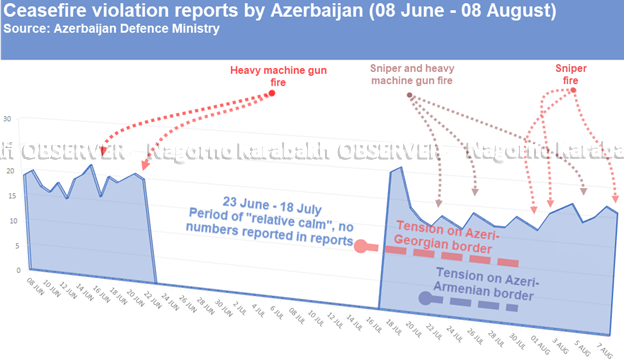 It is worth mentioning that in recent weeks there has been a rise in tension on the Armenian-Azeri border, as well the Azeri-Georgian border. This last case saw a spike in cross-border incidents with Azeri troops deploying heavily-militarised border guards a few hundred metres form the famous monastery David Gareji (also known as Keshikchidagh by the Azeri side), with Georgian activists storming parts of the complex that lies on the border between the two countries. While on the Armenian-Azeri border, an Armenian serviceman was killed and several others from both sides injured in cross border shootout incidents.