This past week, Armenia received the most significant arms supply in years from its strategic partner Russia. The arms included an unspecified number of Tor 2M anti-air missile systems, at least five Osa anti-air missile vehicles and four Sukhoi Su-30 multi-purpose fighter jets. The overall value of the military hardware, although not officially published, is likely in the millions of euros, however, bilateral agreements between the two countries as well as financial waviers, such as credit, from Russia to Armenia could possible bring down the exact purchase price paid by the latter. To date, no exact monetary figures are available on open sources.

The armament purchased will provide medium-range air defence coverage, while the Su-30 fighter jets can come to be major assets for both defensive and offensive combat operations. To date, they will be the technologicically most advanced figher planes in the South Caucasus, although in quantity are inferior in numbers.

News about a possible purchase was made official last June, when the Armenian Prime Minister posted a photo of himself in the cockpit of a Su-30 aircraft at the Erebuni airbase in Yerevan, while the country’s Defence minister, Davit Tonoyan, announced that the deal was already agreed upon in early December of 2018.  However, Armenian defence blog, Razm.info, cites Russian military blog, BMPD, which stated that the deal actually goes back to 2012, when the general framework for the agreement was signed.

With open-source details being limited on the matter, one can state that Armenia received four such aircraft today in a deal that totalled 12 aircraft; the manufacturer planes to deliver the remaining eight this upcoming year. The Su-30 aircraft forms part of the armed forces of around a dozen countries, including Venezuela, Vietnam, Kazakhstan, China, India and others. Currently, in the South Caucasus neither Georgia nor Azerbaijan have the aircraft according to the online journal Flight Global: World Air Force 2019.

On the same day as the Su-30 fighters, Armenian authorities also announced the acquisition of at least five Osa-AK air defence systems from Russia. Defence officials made a statement and published photos of high-level military officials, including the Defence Minister, the Head of the Armed Forces and the Prime Minister inspecting the newly-arrived systems at an unspecified military installation. 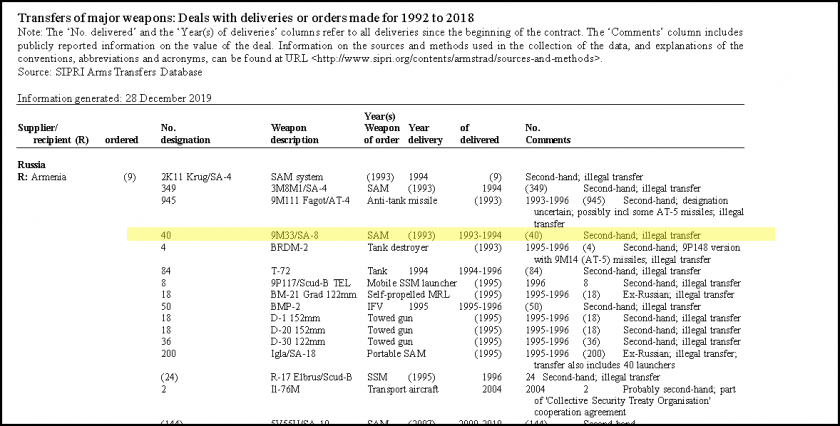 Armenia’s armed forces already had an unspecified number of these weapon systems, reportedly left over from Soviet times; additionally, records of the Stockholm International Peace Research Institute (SIPRI) show that 40 Osa-AK systems were transferred to Armenia between 1993-1994. It is also reported that the de facto Nagorno Karabakh Armed Forces also possess the weapon, of which, one was destroyed according to a video released by Azerbaijan’s Defence Ministry near the line-of-contact in 2017.

Photos of the official reception by Armenian authorities

Several days prior to receiving the Su-30 and Osa missile system, Yerevan received an unspecified number of Tor M2KM  anti-air missile systems from Russia according to the country’s Defence spokesperson. No further details were provided as to the exact number, price or area of deployment of the systems.

Photos of the acquisition provided by Armenia’s Defence spokesperson