Nagorno Karabakh Observer does not endorse, confirm nor deny the content of official publications and is not responsible for the nature of its content.

The deadliest clashes since the 2016 April war broke out at around 13.45 hours on 12 July, clash erupted on the internationally recognised border between Armenia and Azerbaijan near the Azeri village of Aghdam, which lies between the Armenian villages of Movses and Chinari. During the next few days, the area of military operations extended to an area of approximately 40km between Berkaber and Chinari villages in Armenia based on available official information.

The clashes continued to be of different intensities in different areas, with the area between Aghdam, Azerbaijan and Movses, Armenia seeing most combat operations according to reports. Particularly, mountain ridge lying on the frontier called “Black Rock” (Azeri, Qaraqaya or Qaradaş; Armenian, Sev Kar), with a height of approximately 1000 metres overseeing villages on both sides, has been the main area of tension. During the clashes the use of small arms fire, mortars, artillery, armoured vehicles as well as loitering and reconnaissance unmanned aerial vehicles (UAV)was reported. The exact cause of the incident remains disputed between the two sides.

Attention was brought upon one particular Azeri military position, located metres within Armenia’s internationally-recognised territory. Based on open source information, there are indications that an Azeri military position was overrun by Armenian troops; a non-official video circulating in Armenian news media was geolocated at a location (40°54’23.39″N, 45°31’38.69″E) known to be behind this military position 570 metres to the closest Armenian military position. Between 12-16 July, Armenian defence officials posted photos showing bodies of Azeri troops behind the mentioned military position (1, 2); Armenian officials did not comment on the news about overtaking a military position, not denying nor confirming the news.  On the contrary, the news was strongly refuted by Azeri media quoting defence spokesman Vaqif Dərgahlı, as well as a news report from 17 July from local Ictimai TV. 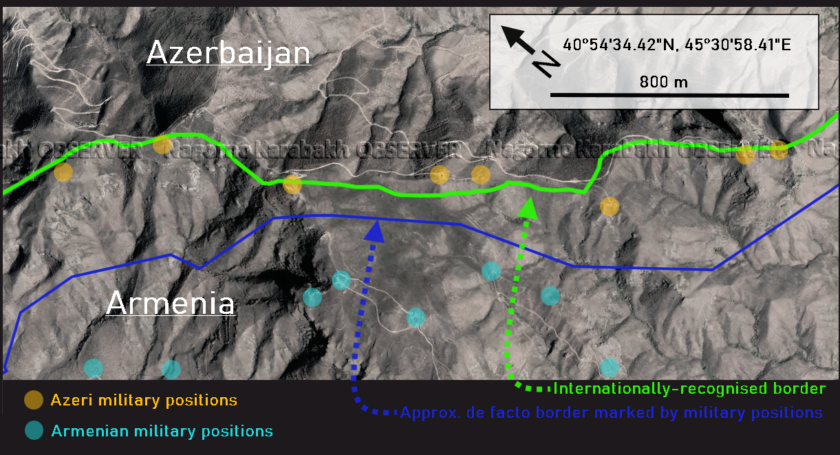 Reports of civilian areas being targeted – Military positions on both sides of the border have been targeted, there have also been reports of villages being targeted by both sides, referring to the villages of Chinari, Karmir Aghbyur, Berkber, Aygepar and the town of Berd in Armenia (1, 2) and Dondar Kushchu, Aghdam and Vahidli  in Azerbaijan. (1, 2) 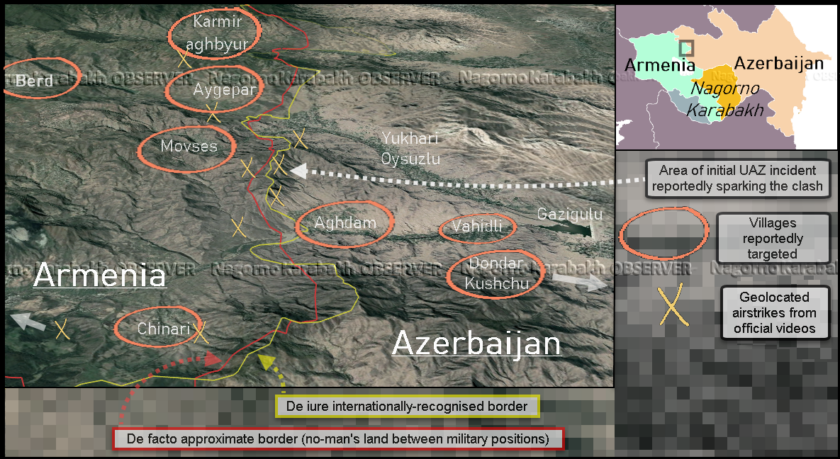 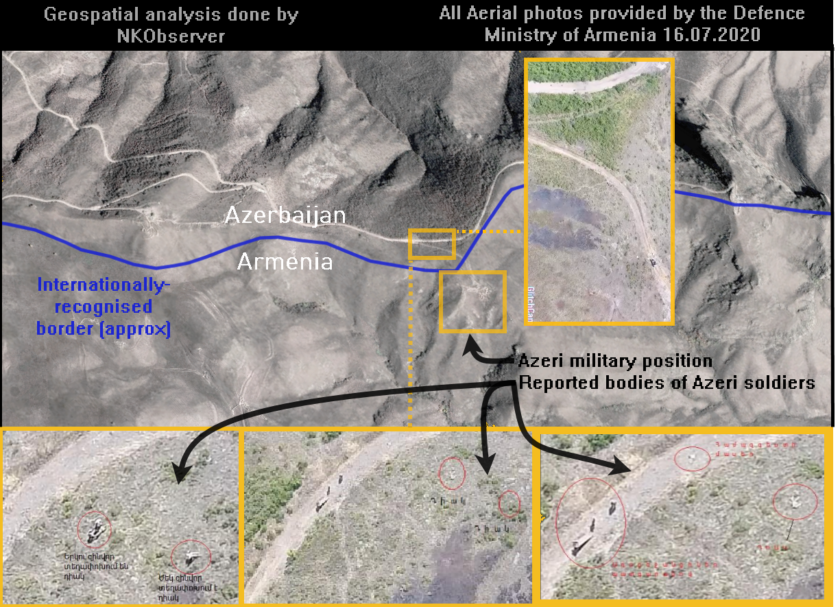 The first official news on the incident came from the spokeswoman of Armenia’s Defence Ministry, who at around 18.00 hours local time reported that at 12.30 hours on 12 July, an Azeri military UAZ jeep had approached the Armenian border apparently trying to breach it and was fired upon. The occupants of the vehicle fled, and an hour later at 13.45 hours Azeri troops tried to capture an Armenian position aided by ground fire, including artillery (sic). The statement concluded that they “were suppressed” (sic) with no losses on the Armenian side at the time of occurrence.

Azeri officials first commented on the incident through the country’s Defence Ministry webpage, releasing news that at 16.08h local time (one hour ahead of Armenia) Armenian forces opened fire on their military positions, violating the ceasefire in Tovuz district with artillery. The statement highlighted that “both sides have losses” (sic) and that a firefight is currently underway with the situation under control. Azeri officials subsequently released a series of videos showing strikes on Armenian targets.

Video publish on 14 July, showing footage from previously published video the day prior from reported  on Armenian targets by the Azeri military

Official statements from the International Community

Members of the international community also released statements expressing their opinions on the clashes. All statements besides those issued by Turkish authorities were neutral in nature.

Organisation for Security and Co-operation in Europe

Besides the limited official reports provided by both sides, a number of non-official sources, including social media users:

Reported footage an initial shootout by Azeri media agency Xural TV showing showing the use of an APC, mortar and heavy machine guns

Significance of these latest clashes

Excluding the 2016 April clashes that took place on the line-of-contact (LOC) between de facto Nagorno Karabakh and Azerbaijan, not on the Armenia-Azerbaijan border, this appears to biggest clash if considering it as one single operation since between Armenia and Azerbaijan when taking into consideration the duration, military means used and losses reported, since the 1994 when Armenia, Azerbaijan and Nagorno Karabakh signed a trilateral ceasefire agreement.

Clashes on the Armenia-Azerbaijan border are known to periodically occur. Major clashes are known to have taken place in April 1997, (1, 2) with an unknown number of losses.  In September of 2015, three civilians were reportedly killed along the Armenian-Azeri broder.  More recently between January and May this year, at least 20 reports of border skirmishes were mentioned by both sides. However, no significant incidents were reported near the area currently affected by the clashes, all incidents according to official reports took place 30 km north between the villages of Berkaber, Abbasbeyli, Kushchu Ayrum, Koti and other nearby villages.

The last major clash previous to this is considered the February 2017 incident that took place on the Azerbaijan-Nagorno Karabakh LOC, when five Azeri soldiers were killed on the line-of-contact between de facto Nagorno Karabakh and Azerbaijan during a reported covert raid on an Armenian position according to Karabakhi officials, while Azeri officials stressed that it was a ceasefire violation by Karabakhi forces.