Cadets from the Artillery School of the Vazgen Sargsyan Military Academy in Yerevan started a series of hands-on training exercises aimed paralleling theoretical knowledge with practice. The events, which will take place from 04-18 May, seek to familiarise cadets with military field conditions.

Training alongside the latter were artillery units from the 5th Army Corps in Armenia participated in live-fire artillery exercises aimed at targeting firing points, firing accuracy and attack techniques for capturing firing points. The event started in the last week of April and are ongoing within the framework of integrating other units in their drills. 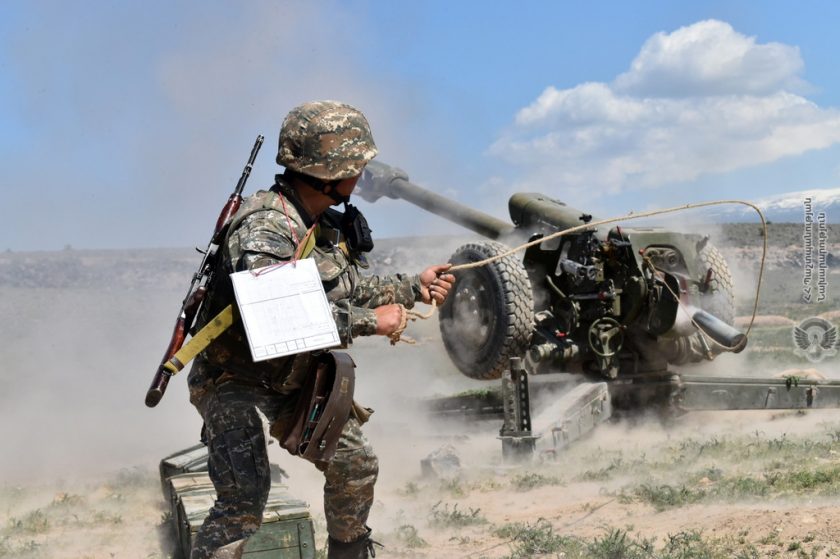 The training later went from preparation drills to live-fire ones, and  both were carried out at the Baghramyan training ground, known for hosting numerous events of the kind. Military authorities supervising the troops praised them for their capacities, and carrying out all tasks related to the event.

Units from the 3rd Army corps also conducted training exercises, seeking do develop their firing skills in field conditions. The event was carried out at an undisclosed training ground, and coincided with several other events of the kind throughout Armenia.

Both Armenia and Azerbaijan have conducted numerous live-fire military exercises in recent months, with Armenia adhering more to Artillery training and development, while Azerbaijan to regional co-operation with Turkey as well as training with helicopter gunships.

Official pictures from Armenia’s Defence Ministry of the three events